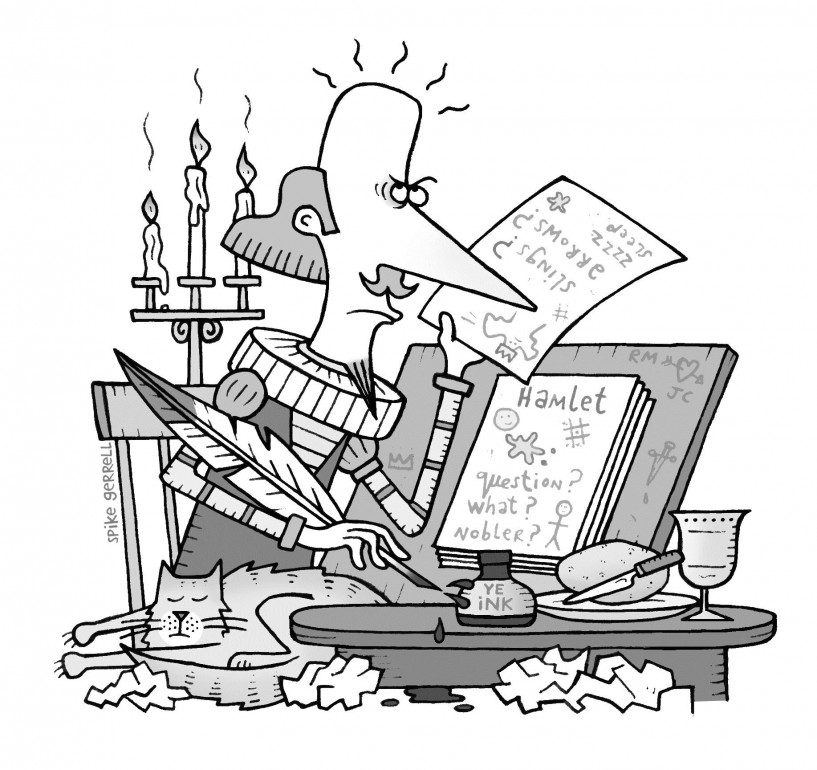 Spike has got lots of experience in illustrating books and recently he has spent most of his time working on children’s books. At the moment he is the illustrator for the Football School Series for Walker Books.

Other work he does includes environmental 3D work, sculpture, painting, photography and poetry.

This year, Spike had an exhibition of intricate Post-it note drawings at the Hertford Theatre Gallery.

“Here is Will at his desk during his working day. He’s stuck writing Hamlet and is a bit frustrated about it. He’s working by candlelight and using a quill pen and ink.

“He’s trying to write Hamlet’s soliloquy and there are little references to that on his papers. There are scrunched up notes dotted around. On his desk he’s scratched a few little light bits of graffiti. A cat is asleep on his lap.

“I wanted my drawing to be accessible and funny and to be something that children could engage with, enjoy and, above all, be a source of ideas to inspire them to create their own portrait.

“I wanted my portrait to present the idea that a portrait doesn’t just have to be a likeness of the person (we all know what Shakespeare looks like anyway!) but can illustrate and highlight different aspects of the person’s character and work.”

Below you can also see the portrait within a two panel cartoon that Spike has created for Shakespeare Week. This is what he says about his cartoon panels:

“In the cartoon, as well as being a bit of slapstick, I've tried to present the idea of Genius and Greatness as something which isn't beyond us in the everyday.

So, although his plays and words are magnificent and Shakespeare himself is undoubtedly a singular Genius he is also human and, in this everyday way, he goes through the same problems as any person (and, crucially, any child) who is trying to think of something to write.”