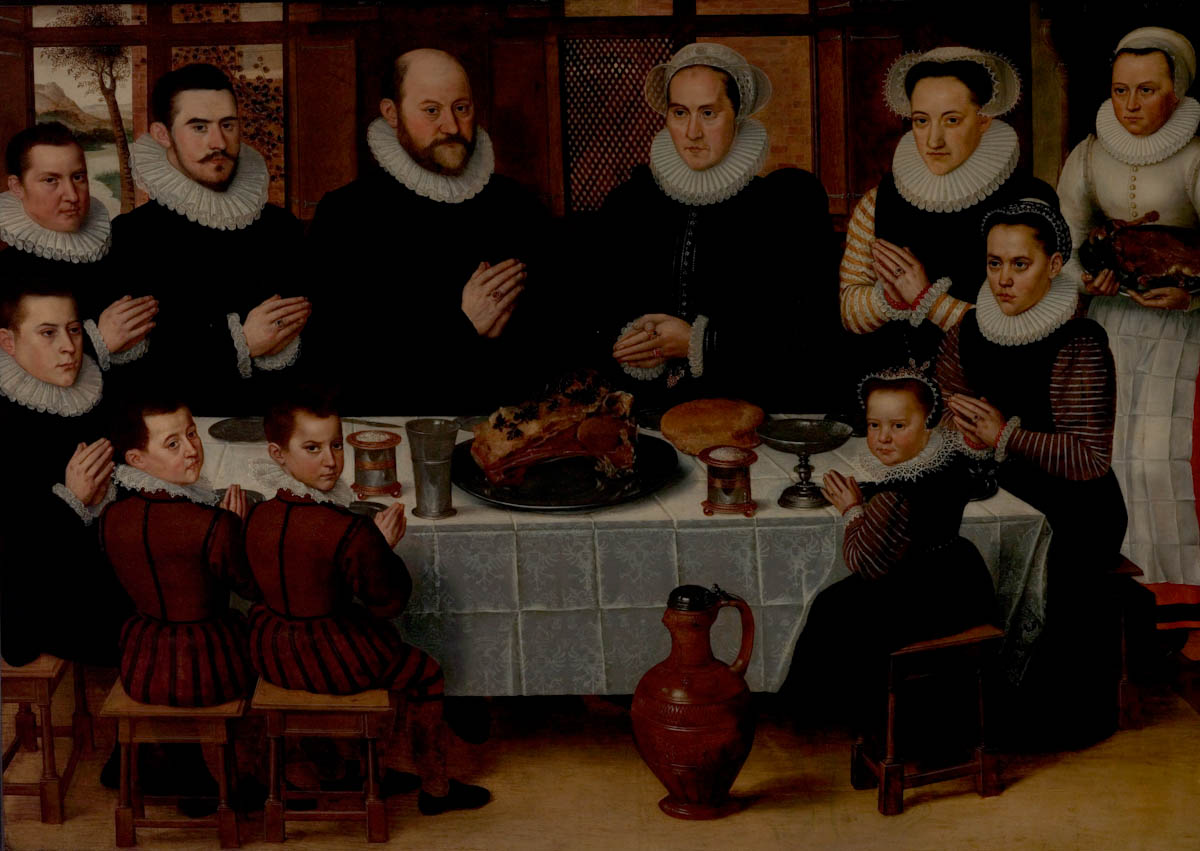 A Family Saying Grace Before a Meal

A painting in oil on board, in an original black and gold frame, about 1585, showing a family group seated around a table laid for a meal. The family are at prayer, and sit around a long refectory table draped with damask tablecloth.

This painting is an early example of the Christian family portrait, a very frequent theme in the painting of the Low Countries in this period. It is thought that the family was probably Catholic (as the Imperial Habsburg escutcheon is woven into the damask tablecloth). This picture is rich in biblical symbolism, derived from Psalms 1 and 128. In the background to the left of the painting, the view through the open window shows a tree by a river (symbolic of a good family man) and a vine growing against a wall (symbolic of the fertile housewife)., There are five children in the foreground, a young girl and her elder sister to the right and two young boys and their brother to the left. All are seated on joint stools. Their elder siblings, a young woman and two young men, are seated either side of their parents on a low-backed settle., The table is laid with pewter plates, two silver and gilt salts, a large pewter beaker, a pewter tazza (a standing bowl with a tall stem), a loaf of bread and a joint of beef garnished with flat-leaf parsley on a pewter charger. A maidservant entering the room on the right brings a joint of lamb. On the floor, close to the youngest girl, is a large, German saltglaze jug, surmounted by a pewter lid.

The father and older boys are dressed in black and wear ruffs around their necks and wrists. The younger boys wear red striped trunk hose and brown doublets trimmed with black. The mother and her daughters wear stiff linen caps that are trimmed with lace and also have ruffs about their necks and wrists. The two youngest girls wear black bodices and skirts, with dark red and white (or silver) striped sleeves. The eldest girl has white and red striped sleeves and the mother wears a black bodice with black, patterned sleeves, trimmed with solver. All the girls wear finger rings on the second finger of their left hands and coral bead bracelets on each wrist. They have gilt trimmed girdles about their waists. The mother wears two rings on her left hand, on her second and index fingers. The maid servant wears a red skirt (kirtle) trimmed with black stripe, a long white starched linen apron (neatly creased) a white bodice with white sleeves and a simple white cap and neck ruff.

The two windows to the rear of the diners are unglazed and have internal shutters. The middle window has a lattice panel inserted. The view through the open window shows a tree by a river (symbolic of a good family man) and a vine growing against a wall (symbolic of the fertile housewife).