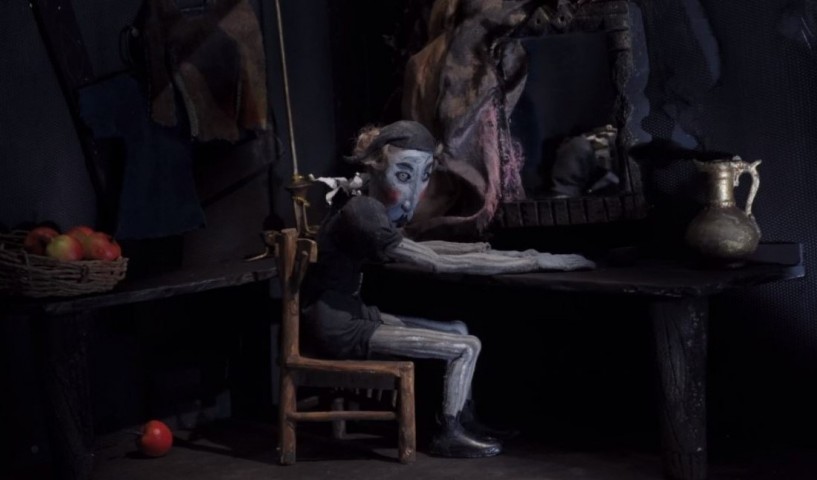 The Shakespeare Film Festival: The Parable of the Blind by Liana Makaryan

'The Parable of the Blind' is an animated short film by Liana Makaryan. The film opens on the scene of a poor theatre. The main hero (jester) envies the king and reaches the bottom of his spiritual oppression.

'Shakespeare came into my life after watching the films “Hamlet” and “King Lear” by Georgy Kozintsev, performed by the wonderful Russian artists Innokenty Smoktunovsky and Jurie Arvet. Later I watched the screen versions of Lawrence Olivier, and my love for Shakespeare's heroes penetrated even more. I was most attracted by the amount of personality that Shakespeare brings to each character. Each of them live, each of them has a polyphonic character ... This is very similar to real life. Shakespeare inherited all the best traditions of the Renaissance. His drama rises up pulling the same soulful strings, which only the highest arts touch, probably it can only be compared with the opera ... In my cartoon “The Parable of the Blind”, I brought to the fore the most acute Shakespearean character - a jester. This creature is ambivalent, and paradoxically through the prism of the fun of its terrible mask, it broadcasts truths ... When creating a film, I wanted to [work to] ... the same levels as Shakespeare’s dramaturgy. This is the level of naked passion, pain and horror. Try to survive the Shakespearean horror, to experience its sharp and beautiful language. That's what I wanted. However it happened, I am very glad to have had this experience.'   Liana Makaryan