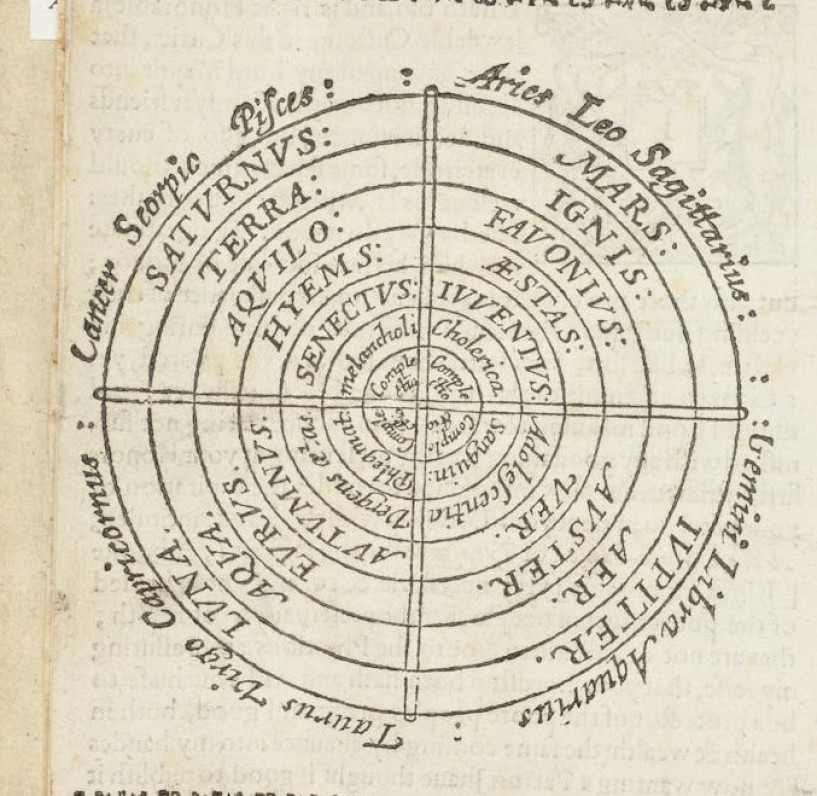 500 years ago, if you were feeling ill, you might call upon an ‘astrologer physician’ to examine the positions of the stars, sun, moon and planets to find out the cause of your sickness. Just as we know today that the movement of the moon affects the tides in the sea, astrologer physicians thought that the movement of stars and planets affected the health of the human body.

This chart is written in the ancient language of Latin, but if you look carefully you might recognise some of the words like ‘Mars’ and ‘Autumus’.

In the innermost rings you can see the ‘Four Humours’. The Four Humours were a medical theory that the Ancient Greeks wrote about that remained popular for thousands of years.  The theory was that the human body contained four humours: blood, yellow bile, black bile and phlegm. If you were unwell, it meant your humours were unbalanced. If you were feeling very sad, for example, it might mean that you have too much black bile. Your physician (doctor) might prescribe a laxative (medicine to make you go to the toilet) to get rid of the excess black bile and restore the bodily balance.

Looking at the constellations of stars, the planets and the seasons, astrologer physicians would use a chart like this to link their movements to the Four Humours in the body. The idea was that all these elements were connected and influenced by one another. ‘Cancer in your star chart’

"This topic has a few similarities with the herbal remedies topic so I thought I’d focus on the astrology side of things. Also, although we might be comfortable with the concept of herbal medicine, we are probably less familiar with the idea that our star signs can influence our health.

"Having gone down that route, the double meaning of cancer was the obvious way to go. It may be an obvious joke but it can hint at a more complicated story that can’t be conveyed in a simple cartoon. Things get un-funny very quickly if a lot of explanation is needed. That’s why we have headlines. Hooked by the big letters (or the cartoon) we then want to read all about it.

"I’ve based the physician on John Dee who, for a time, was Doctor/Astrologer for Queen Elizabeth I. And I titled the drawing - as was common practice in Tudor times - to set up the gag."