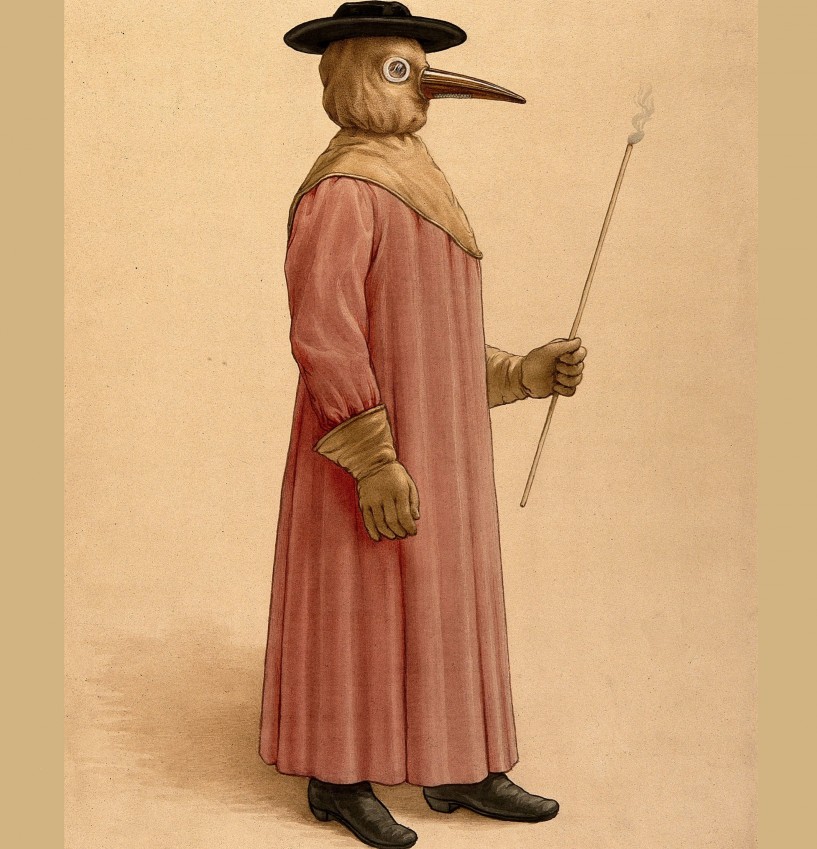 This is an illustration of a plague doctor. His clothes and mask might look strange, but he is dressed like this to protect himself from the highly contagious plague.

According to 17th century science, the plague was spread by bad air; so the long ‘beak’ in the plague doctor’s mask would be stuffed with lavender and other pleasant smelling herbs and plants to ward off the plague.

We know now that the plague was spread by infected fleas jumping from rats to humans. Although plague doctors did not know this, their elaborate outfits also protected them from the deadly flea bites. The cloak of waxed leather, the long gloves and boots, and the headdress covering their mouth and nose would have made it difficult for fleas to find any skin to bite.

As an extra precaution, plague doctors rarely came into plague infected homes or touched patients. Instead they would poke patients with a stick and prescribe ‘remedies’.

However, plague doctors could also cause the spread of plague. Today we know that personal protective equipment (PPE) needs to be regularly cleaned or properly disposed of. Elizabethan plague doctors did not understand this, so they often wore the same outfit day after day without washing it properly. Fleas could cling on to the outside of their clothes unnoticed and the plague doctor could end up spreading the plague further! "This illustration reflects the difference between today’s hospital regular doctor and an ICU hospital doctor -  all the kit but more extreme. If a beak full of lavender was protection from the plague then surely a bigger beak was more protection!

"A recurring theme here will be that things from history might look weird to us but in their day they were tried and tested and modern.

"I’ve done the cartoon itself with simple poses and lighter cross-hatching as a parody (exaggeration) of a more illustrative style.

"The flowers on the shoes are just a bit of fun - taking something from an original source and exaggerating it to the point of silliness." Click here to have a go at drawing your own plague doctor!

What are the differences and similarities between plague doctors and modern doctors wearing PPE? Click here to find out.