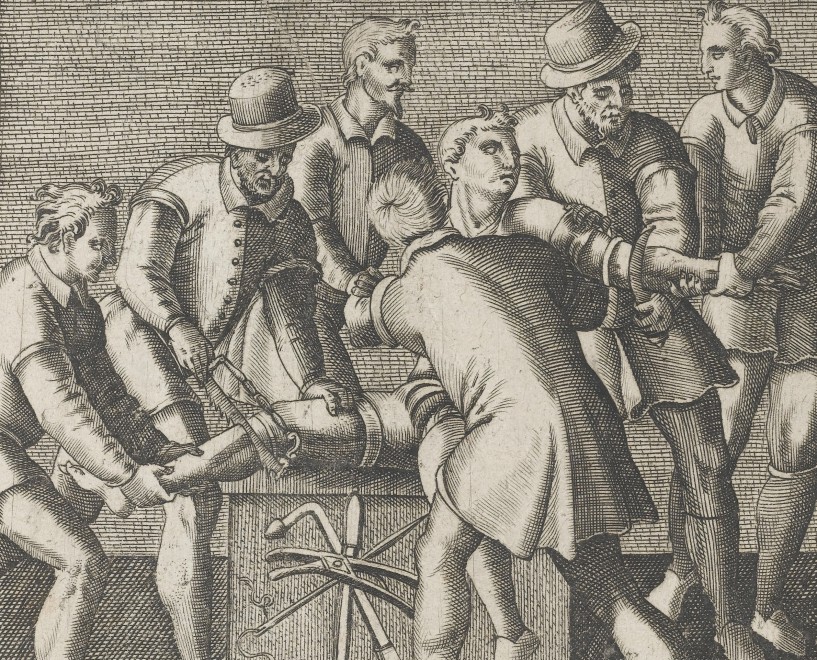 Surgery was mainly concerned with ailments on the surface of the body. Surgeons dealt with boils, rotten teeth, tumours, dislocations, fractures, amputations, cancerous limbs, kidney stones, cataracts, hare lips, burns, knife wounds, gunshot wounds and ulcers. They were also largely responsible for bloodletting. The operation was only one part of the treatment, surgeons also took on the aftercare of patients.

With little means of prevention, pain was an accepted part of treatment. Surgical treatises of the time explained that excessive pain could result in shock and death and also put off potential customers. The success of an operation could depend on a patient’s ability to withstand pain. Alcohol and herbal remedies were often employed to limited effect. Ultimately, the surgeon relied on speed.

Like physicians, surgeons considered some cases to be incurable and refused treatment. This was partly motivated by ethical concerns but a high death rate would not help in attracting new customers. Surgeons could also be sued should they prove unsuccessful. In 1605 a Pascall Lane was imprisoned and fined after an operation on a young girl resulted in her death. There were efforts to protect surgeons however. The Company of Barber Surgeons advised that where a condition was likely incurable, the case should be presented to a group of senior surgeons for examination. If the decision was made to proceed, the surgeon could not then be blamed should the operation result in fatality.

Surgeons were responsible for performing amputations. Muscle knives were used to cut around the limb and peel back the muscle. You can see this with the curved knife on the right hand side of the picture. Surgeons would then saw through the exposed bone with an amputation saw. This is depicted at the bottom left of the image.