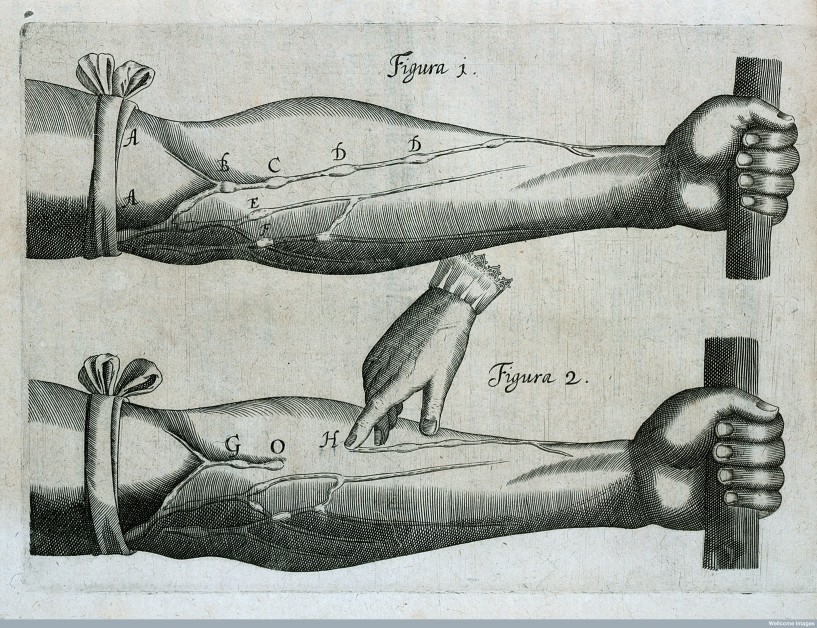 William Harvey (1578 – 1657 AD) was a contemporary of John Hall at Cambridge and is widely held to be the founder of modern physiology. Harvey served as physician to both James I and Charles I and as a lecturer in anatomy at the Royal College of Physicians. For Harvey, the study of the human body should not end with describing its parts but should move beyond this to determine function.

In 1628 Harvey published his seminal work, Exercitatio anatomica de motu cordis et sanguinis in animalibus (The Anatomical Function of the Movement of the Heart and Blood in Animals). Harvey was able to reveal that blood is pumped in an endless circuit around the body by the heart. Harvey was helped in this discovery by the work of earlier anatomists, including Realdo Colombo (c. 1516 – 1559 AD) who had already described the movement of blood between the heart and lungs.

Previously, it was thought that arterial blood travelled to those parts of the body which required it, and was used up by them. Venous blood likewise was drawn to those areas which needed nourishment and the blood used up. In this model the heart did not act as a pump and new blood was formed constantly.

In his treatise, Harvey revealed the detailed experiments which he had conducted in order to prove his new theory. He recorded his observation that when the heart contracted the arteries immediately expanded, as blood was forced into them. He calculated the amount of blood which must pass into the arteries and found that more blood than was found in the whole body would be used up in 15 minutes. He tied ligatures around arms and legs and severed arteries and veins to further study the action of the blood. In De Motu Cordis he reached his conclusion:

“it is absolutely necessary to conclude that the blood in the animal body is impelled in a circle and is in a state of ceaseless motion; that this is the act or function which the heart performs by means of its pulse; and that it is the sole and only end of the motion and contraction of the heart.”

Harvey was attacked by Galenists whose understanding of the body had suffered greatly, something he had feared being a traditionalist himself. Although Harvey’s ideas were ultimately accepted, there was no initial impact on medicine and the theory of the four humours remained dominant until the late 1700s.