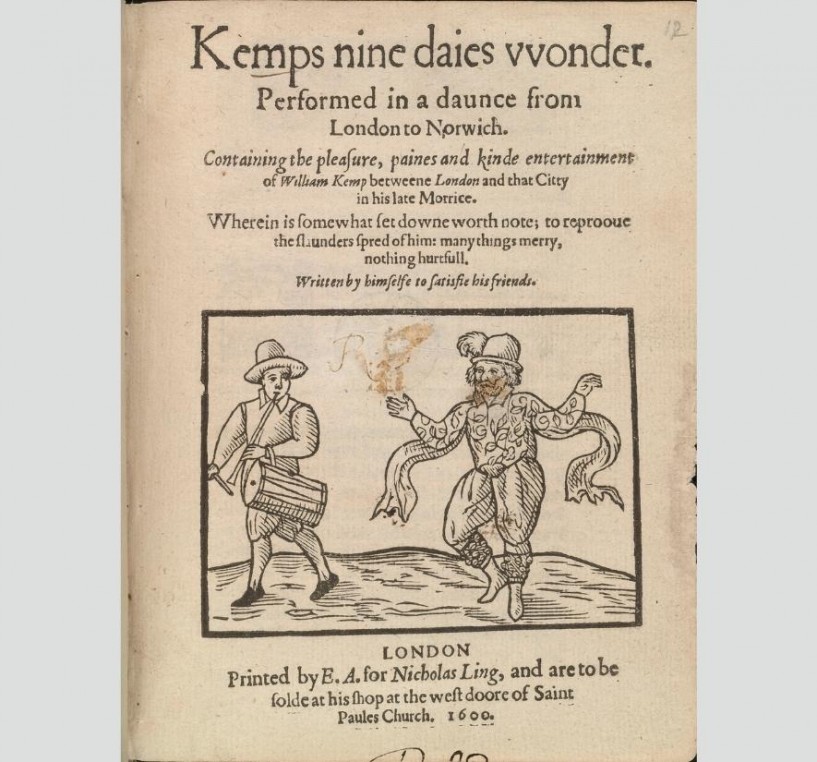 Morris dancing is a popular type of English folk dance. The dancers wear bells on their shins and often use sticks, handkerchiefs and swords in their performances.

In Shakespeare’s era, Morris dancing was particularly associated with the lower classes and the countryside. Morris dancers were often present at rural festivals like May Day and Plough Sunday, where the Morris troupes (sometimes called a ‘jingle’) would welcome in the new seasons with their dances.

In this image you can see the famous actor William Kempe Morris dancing from London to the city of Norwich in Norfolk. William Kempe was a very well known Elizabethan actor and performed in several of Shakespeare’s plays. He was often Shakespeare’s first choice for comic roles like Sir John Falstaff.

After leaving Shakespeare’s theatre company, in 1600 Kempe decided to Morris dance from London to Norwich as a way of maintaining his fame. Kempe called the performance his ‘Nine Day Wonder’ and was cheered along throughout his 177 km journey. In reality, Kempe was travelling for several weeks as he took regular breaks at inns and pubs along the way.

Later in 1600, Kempe published a description of his adventure called the ‘Nine Days Wonder’ where he talks about the people he met and the places he saw on his journey. "Many people tried to dance along with Will for the odd mile or two, but most people didn’t have the stamina to keep up with him. But one of these two characters did manage to dance a whole mile with Will and was rewarded with a crown piece to buy a pint of beer. Can you guess which one it was?"

Imagine you are a newspaper reporter in Elizabethan England reporting on Will Kempe's 'Nine Day Wonder'. Click here to find out more about his journey and to write a feature for the Tudor Times!

© The Bodleian Libraries, The University of Oxford. Illustrations © Marcia Williams 2022.