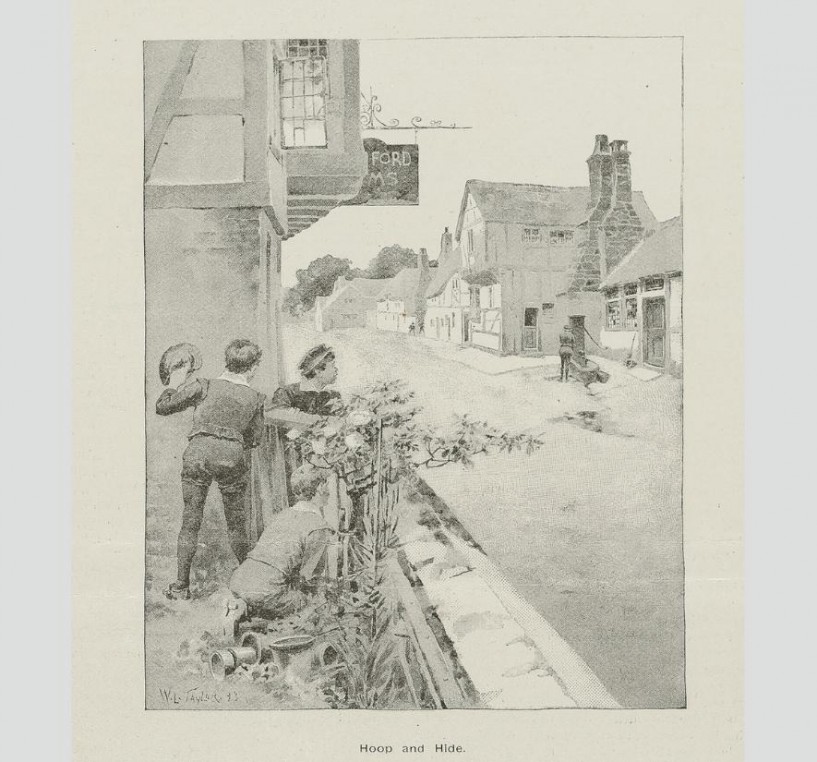 Just like today, people during William Shakespeare’s time used games to pass the time and attended events and festivals to watch others compete. As well as games that required you to be strong and active, it was also popular to play tactical games such as marbles and dice games.

This item is a page from William James Rolfe's pamphlet 'Shakespeare the Boy' (1894). In the pamphlet Rolfe talks about the games and sports that William Shakespeare might have played at home and at school in his boyhood.

Rolfe draws his inspiration from games mentioned in Shakespeare’s plays. In Hamlet for example, Hamlet mentions “hoodman-blind” which Rolfe thinks is an alternative name for blindman’s buff, and in A Midsummer Night’s Dream Titania mentions “the nine men’s morris is fill’d up with mud”.

Rolfe also included illustratrations like this one in his pamphlet. Can you guess the game that Rolfe’s imagined young Shakespeare and his friends are playing?

They are playing ‘hoop and hide’ which is very similar to hide and seek. Victorians like Rolfe added an extra rule to hoop and hide where you had to kiss anyone who was found hiding in or near a bed. We don’t know whether Shakespeare ever had that rule when he played!