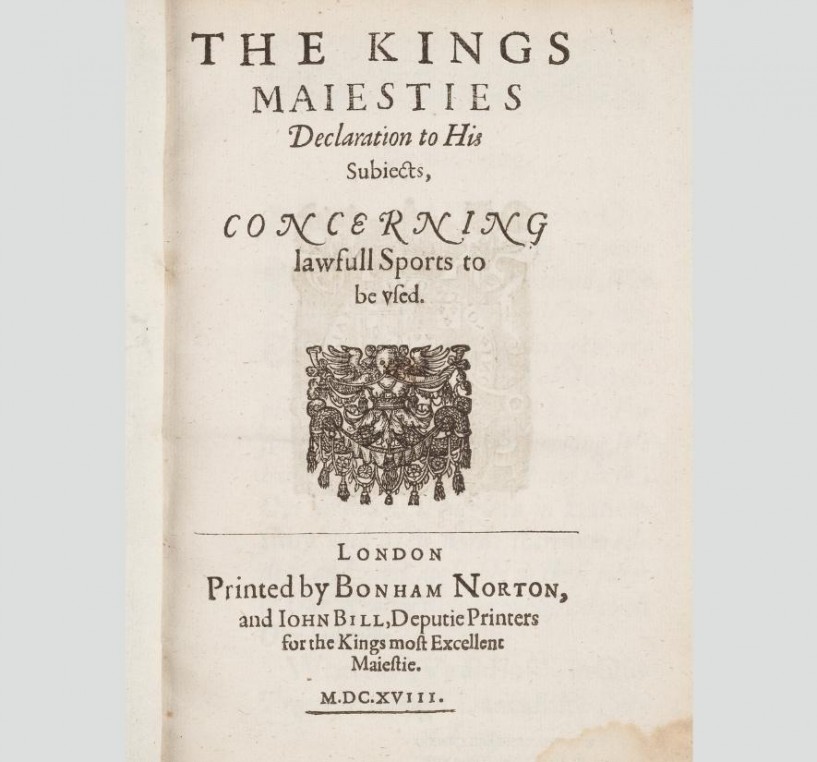 Sport in Tudor and Stuart times

The Tudors and Stuarts enjoyed playing and watching sport, just like we do today. You might have played some of the same sports as them, such as tennis, football and horse-riding. Although in some instances, like tennis, you might notice that the equipment and rules have changed over time.

There are other sports in Shakespeare’s time that might be unfamiliar, such as fencing and archery. Tudor and Stuart men were encouraged to learn to use swords in fencing, and bows and arrows in archery so they would be ready to fight in the army if England went to war.

Unlike today, there were laws that decided when sports could be played and who could take part. This object is a page from a declaration made by King James I in 1618 in response to an argument between the Catholic Church and the Puritans about when sport could be played. The Puritans did not want people to play sports on Sundays, as it would distract people from going to church.

King James decided to compromise and allow some sports to be played on Sundays, including archery and Morris dancing for men, and dancing, ‘leaping, vaulting, or any other such harmless recreation’ for men and women. Whereas sports associated with ‘the meaner sort of people’, like bowling, were banned. "It wasn’t only Tudor tennis that was different from today, football was a totally different game. In fact, I’m not sure there were any rules at all. The ball would have been made from a pigs bladder stuffed with hair and the object of the game was to get it from one village to the next. The goals were often over a mile apart and the game could go on for hours or even days. Anyone could play; young, old, fit or fragile so you could guarantee there would be injuries, especially since kicking, punching and running with the ball were all part of the fun!

I imagine a lot of balls got lost on the way from one village to the next, and some illicit balls introduced. How many balls can you see in my football picture? You might also spot a few bruises and injuries!" “I had a lot of trouble settling on an image for this football picture. I had several ideas, but they didn’t seem to show the chaos I imagine a Tudor game to be. So I did some more research and found some old paintings of early football matches and they certainly were wild! I also looked at some old maps from the time, because I wanted my picture to be contemporary but also have a feeling of being in the Tudor period.”

“After I had done the drawing in ink the paper looked far too white and modern so I made a cup of tea and washed it over the drawing. That was scary as you can never be quite sure that the ink won’t run! I then painted over the tea with watercolours, trying to stick to the colours used on the old maps.”

Do you fancy creating your own Shakespeare football team? Click here to access a literacy pack full of fantastic football themed activities.