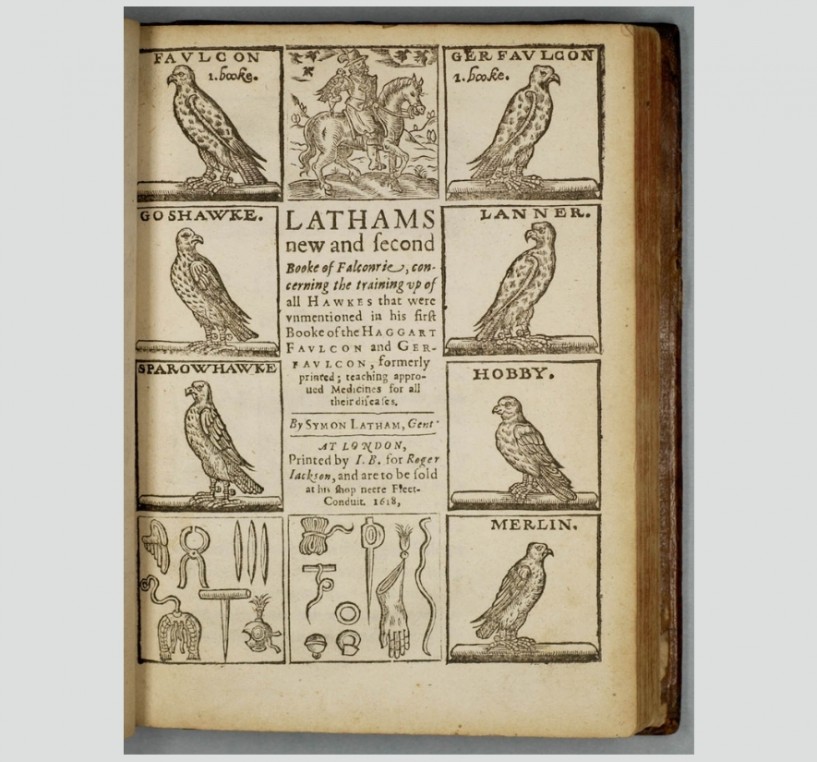 ‘Falconry’ is where a bird of prey (such as a falcon) is trained to hunt and catch other animals for the benefit of their human handlers. This involves training the bird to trust humans and respond to their directions. The art of falconry has been around for at least 4,000 years. Historians think it originated as a way for humans to catch food.

In Shakespeare’s time the purpose of falconry was not just to catch food. Falconry was also a pastime that was particularly enjoyed by the noble classes. The book pictured here would teach new falconers how to train and look after different types of bird.

We don't know for sure if the lower classes took part in hunts, but as the sport of falconry would have required time, money and land it is much more associated with the wealthy and noble classes. The cost of buying the baby bird itself could be more than a labourer's yearly income.

Unlike some of the other sports that we have looked at in this exhibition, noble women were also able to take part in falconry. If we look at portraits of noble women from this time, we sometimes see them holding a falcon or a merlin (the smallest bird of prey). There are two pages from Joseph Strutt's 'The Sports and Pastimes of the People of England' (1898) showing the history of falconry and hawking. Strutt also records how falconry was a sport that was acceptable for women to take part in. "I know that falconry is meant to be a sport of the wealthy and noble, but somehow I can’t quite believe that young people wouldn’t have raided nests and trained merlins or even falcons. I can imagine that if you were poor it would be a useful way of doing some long-distance poaching – unless, you were a vegetarian, of course!" “I always find drawing birds very tricky. It is hard to get their beaks to convey the right expression! The bird in this picture is really cross because it has gone to all the trouble of catching a rabbit – just to be told off. I tried to convey this through the line above the eye and also the way it appears to have stopped in mid-air. It’s thinking ‘what are you talking about, carrots? I’m a bird of prey, not a gardener!'”