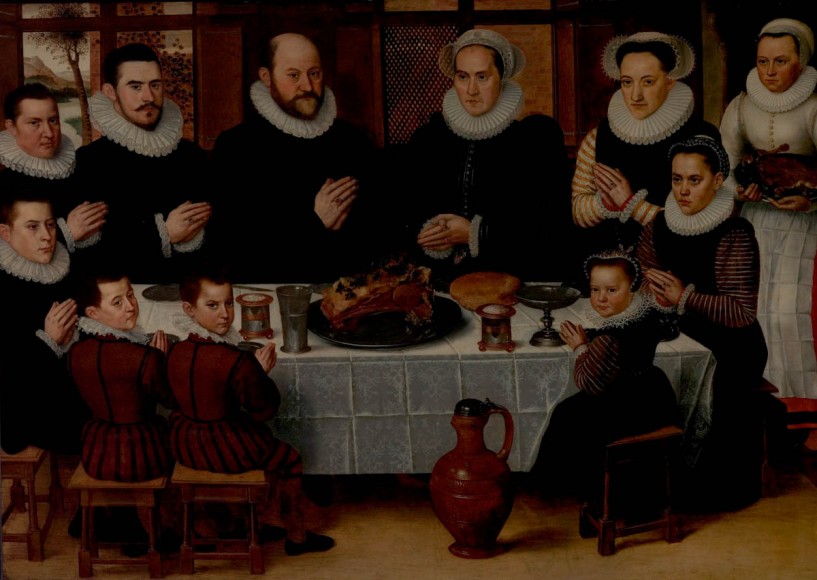 This painting, attributed to Flemish artist Anthonius Claeissins [an-TOW-nee-us KLY-sens], is almost one and a half metres wide, and a metre high. It's painted in oils on board, in an original black and gold frame and dates from around 1585.  It's an early example of the Christian family portrait, a very frequent theme in the painting of the Low Countries in this period. The family numbers 10, and their meal remains untouched as each family member holds their hands in prayer and looks at us, giving thanks to God before eating.

The table is side on to us, and takes up most of the width of the painting. It's laid with a fine damask tablecloth and the perspective makes it look as though the table is tilted towards the viewer, the better to display its contents; pewter plates, a pair of silver-gilt salt-cellars, a large pewter beaker, a pewter tazza (a standing bowl with a tall stem), a loaf of bread and a joint of beef garnished with flat-leaf parsley on a pewter charger. Woven into the damask tablecloth is a repeat pattern of the Imperial Habsburg escutcheon - two eagles either side of a shield - suggesting the family is Catholic.

The male head of the family sits prominently just left of centre, with his wife to the right. The sons sit to the left of their father, in descending age order, wrapping around the end of the table. The daughters, again in order of age, sit to the right of the mother, wrapping around the right end of the table. This means that the younger children sit in front of the table, twisting around on their joint stools to face us - two boys to the left, one little girl, her feet not touching the floor, to the right. Standing to the right of the family group is a maid bringing a joint of lamb to add to the meal. These figures dominate the space, leaving very little of the interior of the room visible.

There is something very formal about the composition, reinforced by the clothes the family wear. The father and older boys are dressed in black, with white ruffs around their necks and wrists. The father has a round face with a bald pate, a neat fringe of brown beard, and red cheeks. He wears a ring on the ring finger of his right hand. To the left of him, his oldest son sits very upright. He has dark swept back hair and a neat pointed beard. The other boys are clean shaven.

The two younger boys at the front wear red striped trunk hose and brown doublets trimmed with black. The youngest is fixing us with a firm jawed stare.

The mother and her daughters wear stiff white linen caps that are trimmed with lace and also have ruffs about their necks and wrists. The mother wears a black bodice with black, patterned sleeves trimmed with silver. She has two rings on her left hand, on her second and index fingers. Her hands are held together in prayer, but she is the only person whose fingers point slightly downwards and they are angled towards her husband. The eldest girl has bright red and white striped sleeves. Her gaze is soft, yet direct. The two youngest girls wear black bodices and skirts, with dark red and white striped sleeves. All the girls, even the youngest who's about 4, wear rings on the second finger of their left hands and coral bead bracelets on each wrist. On the floor, close to the smallest girl, is a large, German salt-glaze jug, with a pewter lid.

The young maid servant standing to the right, only just gets into the picture, the right side of her cut off by the frame. She wears a red skirt or kirtle, trimmed with black stripe, a white long sleeved bodice and a simple white cap and neck ruff. A long white linen apron is neatly ironed - the rectangular creases reflecting the creases on the table cloth.

There are two unglazed windows behind the diners with internal shutters. One, behind the mother, has a lattice panel screening one side. The view through the open window to the far left shows a tree by a river and a vine growing against a wall.

These details point to the importance assigned to mealtimes in family and religious life in the sixteenth century. Families were thought of as ‘little churches’ as the household was the daily focus for pious service to God, with carefully outlined responsibilities for husband and wife. These are represented through the window: the tree alludes to the father’s duty to serve as a family man, as referred to in Psalm 1:

"And he shall be like a tree planted by the rivers of water, that bringeth forth his fruit in his season."

Psalm 128 figures a wife as a fruiting vine, responsible for bringing forth children:

"Thou wife shall be as a fruitful vine by the sides of thine houses: thy children like olive plants about thy table."

Shakespeare draws on this theme in his play, The Comedy of Errors, when, in Act 2, Scene 2, Adriana addresses a man she thinks is her husband:

"Thou art an elm, my husband; I a vine,
Whose weakness married to thy stronger state,
Makes me with thy strength to communicate."