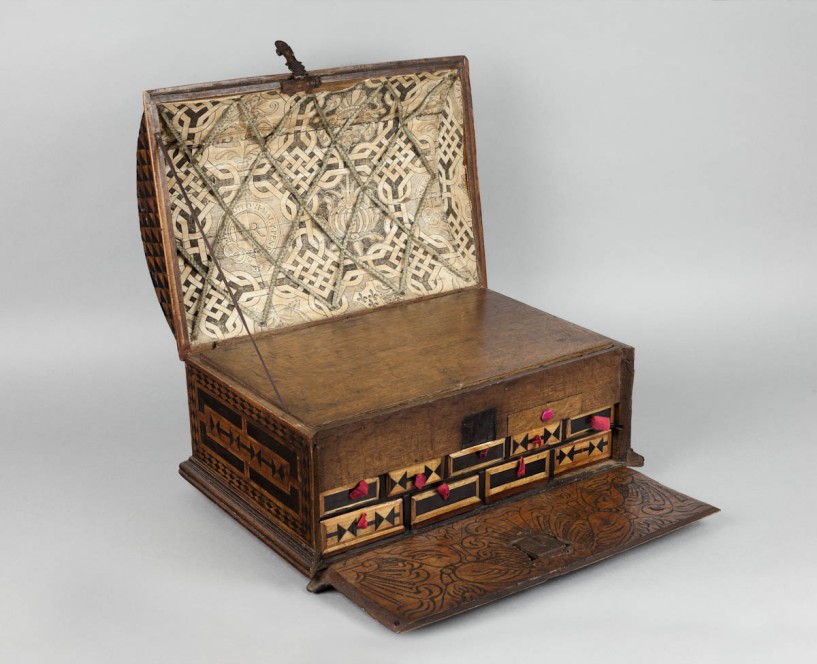 This wooden chest was made during the late sixteenth or early seventeenth century, probably by a German immigrant in London. It measures nearly 40 centimetres wide, 20 centimetres high, and the same depth. It would have been used by a medical practitioner, either a physician such as Shakespeare's son-in-law Dr John Hall or an apothecary, who would carry it around with them.

When closed, the chest has a curved, barrel shaped lid, which could be locked shut with a metal clasp at the front. The outside of the chest is richly decorated, veneered with geometric parquetry in black bog oak and rich brown holly. It stands on 4 turned ball feet, hidden underneath the base.

When the chest lid is unclasped and lifted, it reveals a plain wood inner lid. The inside of the curved lid, though, is lined with black on white, block-printed armorial paper, which may once have been wallpaper.  Within a framework of interlaced geometric knots are a number of different motifs, such as the Tudor Royal Arms, Tudor roses, the ER monogram within a garter belt - indicating Elizabeth I. There are also pomegranates and grotesque classical masks. This paper is overlaid with a lattice of woven silk braids held in place by flower-headed brass tacks.

When the inner, plain wood lid is lifted it reveals 15 compartments of differing sizes. These would have held oils, herbs and ointments as well small tools such as syringes.

The front of the chest is hinged at the bottom so it too can be opened. This panel's internal face is highly decorated with a carved design of leaves and vines. Behind it, at the bottom of the chest, are two rows of small draws, four at the bottom and 5 above. These are veneered with bog oak and holly parquetry - the holly wood, protected by being inside, has a brighter, almost golden sheen which contrasts strongly with the black of the oak. There's one more concealed drawer, matching the plain wood of the box interior.  It's just above the decorated drawers and to the right of centre. 9 of the 10 drawers have pink silk pulls remaining.