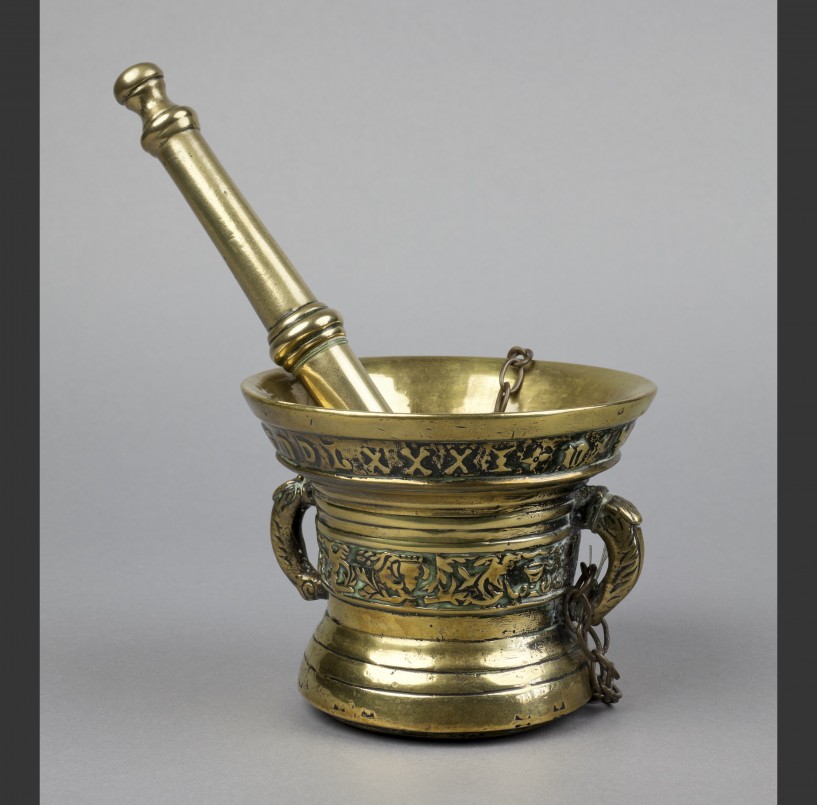 "Give me some drink; and bid the apothecary
Bring the strong poison that I bought of him.”
[Winchester, Henry VI, Part II, Act III, Scene 3]

Mortar and pestles are used to prepare ingredients by grinding and crushing them.

This mortar and pestle was made from bronze in Mechlin [MEK-lin], in the Netherlands. It stands 10 and a half centimetres high. Its straight body flares slightly at the foot, with a greater flare at the top to create a wide lip - about 13 centimetres across.

The main body of the mortar is decorated with 7 slightly raised rings. Within these is a central band of flowers. Attached above and below this band are two curved handles, decorated with leaves. A Latin inscription running around the flared lip gives us the maker as Peter Ghein [gyne] and the date of 1581.

The Vanden Gheins were very well-known bell founders of the time, and five of them were called Peter. The date narrows it down to a choice of two of them.

Although the outside, especially within the bands of decoration, shows some darkening, the inside is still bright and shiny. Sitting inside is the pestle - about twice the height of the mortar, and slim. It too has raised rings around the small round knob at the top, and around the centre of the shaft, where it rests against the mortar's lip.

Apothecaries were considered among the lowest class of medical practitioner in Shakespeare’s time. As tradesmen they would cater for everyone, their ‘recipes’ bought by the poor in times of sickness or need, as well as by professional physicians who required special concoctions for their wealthy clients.

But apothecaries weren’t the only people to use mortars and most families who could afford it would have had one. They would have had access to their own variety of medicines and ingredients from their own gardens that would need to be prepared -making powders, oils, and ointments for aches and pains, as well as recipes for pies, stews and even beauty treatments. One recipe suggests grinding amber to a powder in a medicine to induce childbirth.