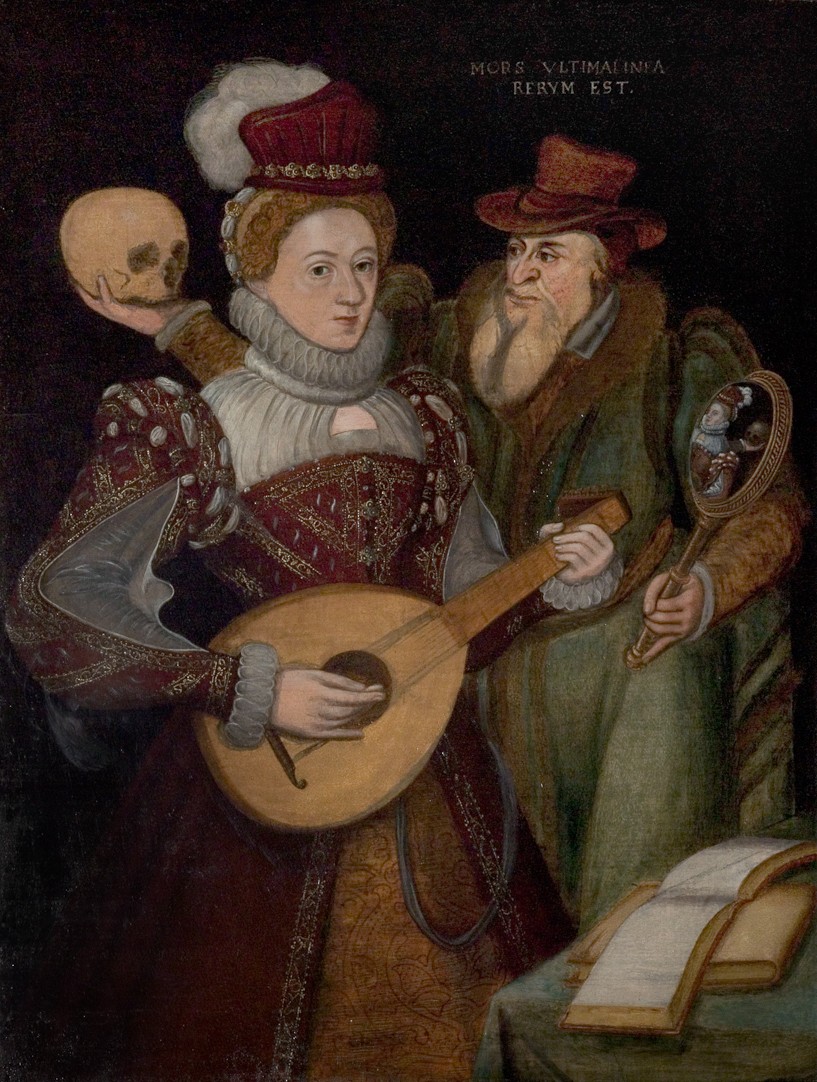 This oil painting, from the late 16th century, measures 49 centimetres wide and 65 centimetres tall. It's mounted in a black frame. It shows a young woman playing the lute. To the right, an elderly man holds a skull over her shoulder and a looking glass in his other hand. The background is dark.

The young woman dominates the image. She wears a sumptuous embroidered V-shaped bodice of rich burgundy, decorated with gold thread. The shoulders are puffed, with little lozenges of white, and the long sleeves are slashed to reveal a white lining and a delicate gauzy inner sleeve. The burgundy skirt of the dress parts at the front to show a fine damasked under-skirt of golden-yellow. A tall undulating ruff around her neck nestles against her chin, and ears. She has a pale face and reddish hair, curled up from her smooth forehead and held back with a delicate lace hair band. Perched on top of her head, a burgundy velvet hat with a narrow brim and gold hat band. A cloud-like white feather plumes from the back.

The woman looks confidently out at us as she strums on the lute - a book of music laying open on a low table in the bottom right corner of the painting. Her world is one of instruments, books, rich furniture, and fine clothes - symbols of learning, harmony, wealth and pleasure. She seems carried away by the notes she is playing.

The figure of the old man is to the right and standing slightly behind her - the dull, earthy greens and browns of his clothes making him blend in with the dark background of the painting. He has a full white beard and a wide-brimmed hat - and he looks directly at her, though she seems unaware of his presence. One arm reaches across behind the woman's neck. In his open hand he holds a skull - directly behind her head, to the left of the painting. In his other hand is an oval, convex mirror on a slender handle. As he holds it up in front of the woman, we glimpse her small reflection in it - alongside the reflected skull. But the woman isn’t looking at it.

In the dark background, above the old man's head to the top right of the painting is a Latin inscription from Horace's ‘Epistles’ : ‘MORS/ ULTIMA/ LINEA RERUM EST’ - which translates as ‘Death is the thing that is last in line.’

This type of allegorical painting is known as a vanitas [VAN-i-tahs] - so called for its reference to Ecclesiastes 1:2, ‘Vanity of vanities; all is vanity’.

Artists associated with this type of painting are Hans Eworth [HANS worth], Lucas de Heere [HEER], and Joris Hoefnagel [OR-ess off-NAA-gal], though the painter of this work is unknown. Vanitas images reminded early modern viewers that despite wealth, learning and power, death awaits all and one would do well to take care of one’s spiritual well-being rather than concentrating only on earthly pleasures.