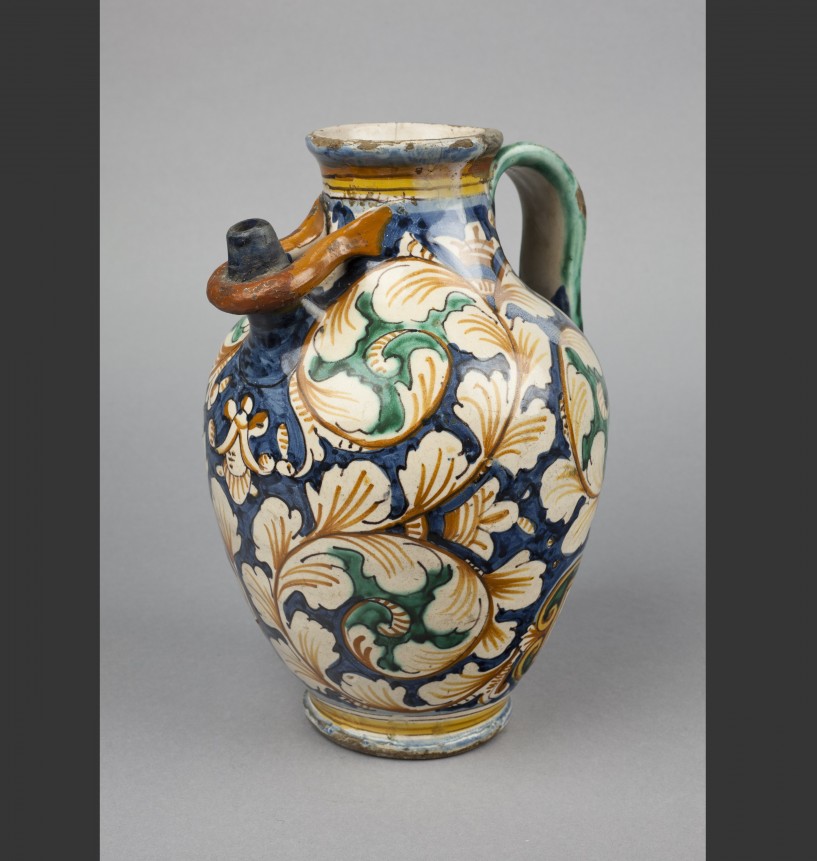 “It is but as a body yet distempered;
Which to his former strength may be restored
With good advice and little medicine.
My Lord Northumberland will soon be cool’d”
[Henry IV, Part II, Act III, Scene I]

Made between 1675-1700 in Montelupo, Italy, this is one of a large collection of colourful ceramic jars used to store medicines. Different types of jars were used to store different styles of medicine - from ointments and powders to syrups and even pills.

It's 23 centimetres high and although called a jar, has a shape that resembles a jug. Used for a ‘wet’ medicine, it has a spout one side and curved strap handle the other. The body swells out from a narrow base, and narrows again to an open lip at the top - which would have been used for filling the container. The short spout emerges about three quarters of the way up, as the jar begins to narrow. Although quite squat, the exposed spout is reinforced with a ceramic collar which loops around it from near the lip of the jar.

The outside of the jar is highly decorated with extravagant foliage painted in ochre and green, which scrolls up and around the blue body of the jar. The spout is also blue, its reinforcing strap a caramel brown, and thin brown and yellow stripes ring the lip. The handle is painted green, and on the body of the jar below it is an oval which contains a brown lion crowned with a helmet. Beneath this the drug name SY DI HISOPO [Italianate: See Dee HISS-oh-po] is written in black capital letters. This is syrup of Hyssop, which has been used since earliest times as a treatment for coughs, asthma, stomach aches, nasal catarrh and pleurisy.

The contents of these medicine jars evoke a different age and approach to treatment. Natural foods, minerals and herbs were used, and medicines were made up of extensive lists of ingredients including fresh and dried plants, roots, bark, wood, herbs, flowers, fruits, buds, seeds, gums, rosins or juices pressed from plant material - as well as products from living creatures. The aim of the medicines was to bring the four humors in the body back into balance.

During Shakespeare’s lifetime, the teachings of the Swiss physician Paracelsus [pah-rah-SELL-suss] were beginning to take hold in England although they were by no means popular or widespread. Paracelsus advocated the use of chemical and mineral ingredients in medicines.