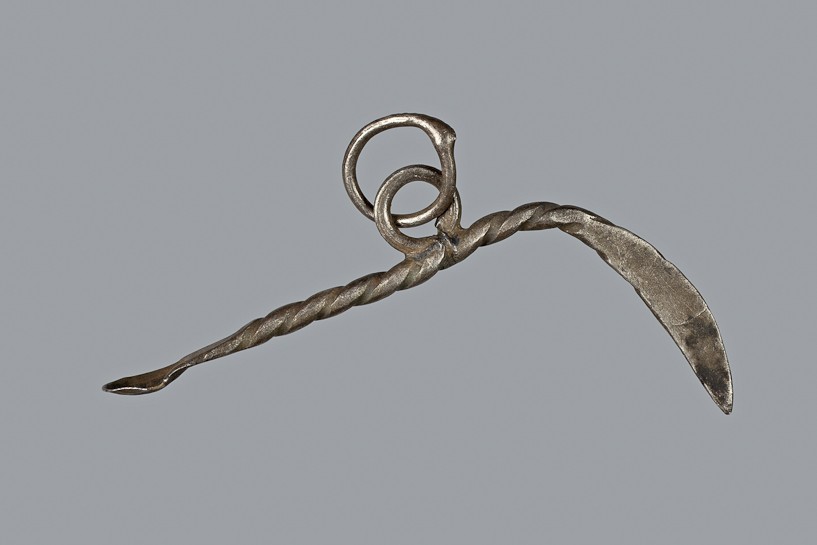 This small, delicate silver item was made in the sixteenth century. Measuring only 37 millimetres long, it has a tiny spoon at one end to scoop out the ears and a flat sickle shaped blade at the other - a combination nail cleaner and toothpick. The slim stem between them is twisted - like a cast-iron poker, or an ornate metal gate - but here the size of your thumb nail. A ring attached to the stem, near the sickle-shaped blade, would have been used to hang it from a belt.

There's a common misconception that people in Tudor England were not concerned with personal hygiene. Certainly people did not bathe often, but we have to remember that there was no running hot water.  Water would need to be heated on a fire - a time consuming business. Additionally people felt bathing was bad for you; believing it blocked the pores of the body preventing excess humors from escaping, and therefore causing illness.

People were, in fact, highly aware of their appearance and their manners. ‘Courtesy’ or etiquette books from this time instruct against picking your ears at the table. And people were not to clean their teeth with a finger but instead use a toothpick. Table manners were important to all ranks of society, not just the elite.

It's possible that a cleaner such as this one would have been for private use only - in the same way that a person’s cutlery was used by them alone. It may have been used after each meal, much like we clean our teeth and hands after eating. Although an everyday item, the fact that it is made of silver demonstrates the owner's social status.