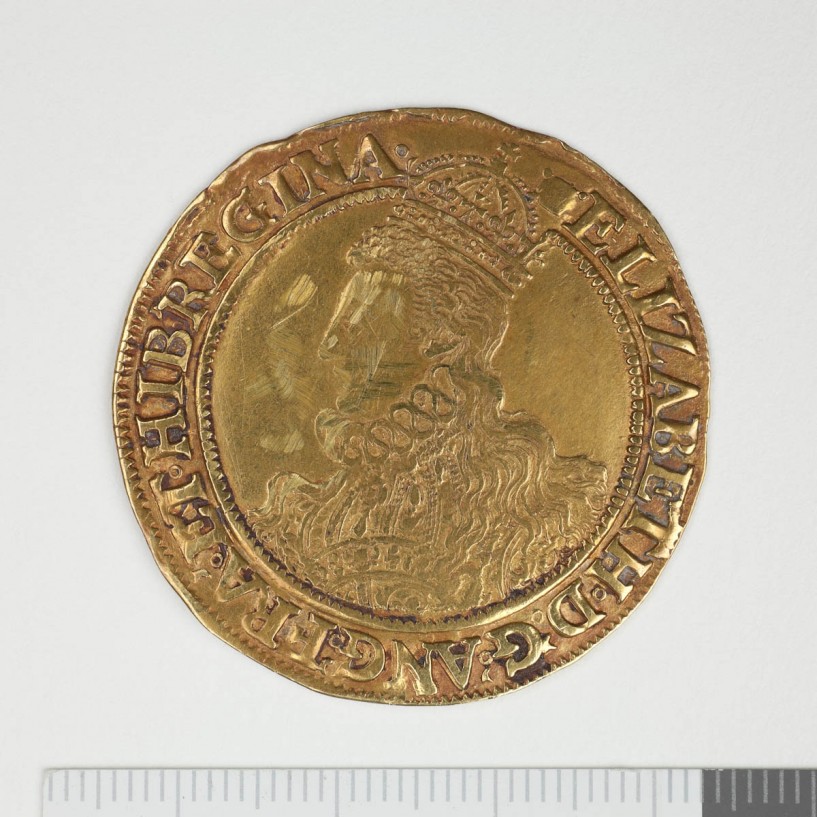 "to my godson William Walker 20 shillings in gold"

In this line from Shakespeare's Will, he specified that the bequest be ‘in gold’ - meaning a coin such as this, made of hammered gold. Known as a ‘sovereign,' this coin, was worth 20 shillings, or one pound and was made between 1594-1596, during the reign of Queen Elizabeth I.

At the time, the yearly income of a Stratford schoolmaster was about £20. It is known that William Shakespeare bought New Place in Stratford in 1597 and paid about £120 for it. Located next to the Guild Chapel, it was an impressive property appropriate to Shakespeare’s wealth and social standing. Shakespeare owned New Place for 19 years until his death in 1616. During this time he wrote more than half of his plays. It was the only home he ever purchased for himself and his family – his wife Anne and their daughters Susanna and Judith. Shakespeare’s son Hamnet died aged 11 in 1596, the year before the house was purchased.

The gold coin, which is about 3cm in diameter, has a portrait of Queen Elizabeth I in the centre, within a beaded circle. She faces to the left, her head in profile, with her shoulders angled towards us. She wears an ornate bodice decorated with jewels, with a tall, undulating ruff around her neck. The details of her face are worn smooth, but we can still discern the strong line of nose and chin. Her hair is curled tight to her high forehead, but cascades down her back and over her shoulder. She wears a dome shaped crown. The cross on the top overlaps the border which runs around the rim of the coin, in which is the inscription ‘ELIZABETH. D. G. ANG FRA ET HIB REGINA’ meaning ‘Elizabeth by the Grace of God Queen of England, France and Ireland.’

On the other side of the coin is the British coat of arms with a crown on top and the letters E and R either side, which stands for Elizabeth Regina. Running in a ring around this is a Latin inscription meaning ‘May the shield of faith protect her.’