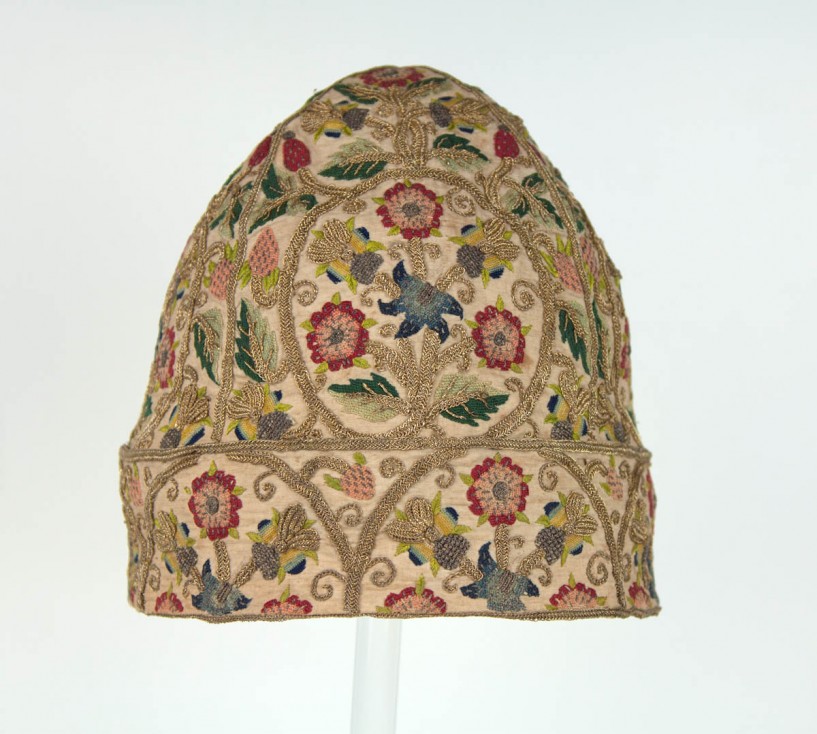 Nightcaps are rarely seen today but in Shakespeare’s time, more or less everyone would have worn a nightcap, also known as a ‘night-bonet’ or ‘biggin’ on a daily - or rather nightly - basis.

This nightcap, though, was certainly not designed to keep the wearer warm in bed. Made between 1600-1625 it's made from a single piece of white or cream linen embroidered with colourful silk and silver gilt threads.

The cap fitted closely to the head. Stems of plaited silver gilt thread divide the cap into four tapering triangular quarters. Another golden stem creates a brim along the bottom, deep enough to be turned up. The rich and elaborate decoration is repeated on each of the four quarters. Within each, more gilt thread creates a circle. From the outside of the circle grow embroidered thistles, green serrated leaves, small pink strawberries, and tiny red buds. Inside the circle, more golden stems entwine and blossom with flowers; three roses with bright red petals and a large pink centre, two blue and yellow thistles with bristling crowns of gold, and in the centre, the deep-blue star-shaped borage flower. A series of gilt-thread semicircles, containing the same floral elements, decorate the brim.

During Queen Elizabeth I’s reign, nightcaps became so elaborately designed that it was common for people to wear them during the day - especially older people who needed protection for their bald pates. The nightcap was an informal garment to be worn around the house in the evening, after the rigours of the day were over. The householder would change out of his formal or practical day clothes into something a little more comfortable. Nightcaps became a symbol of domestic relaxation, with the level of decoration being an indication of their owner's status. The flowers on this nightcap were chosen to symbolise beauty and fertility, and were popular with the wealthy upper class of the time. The owner of this particular nightcap is not known, and it is still in such perfect condition that it may never have been worn.

“… as he refused it,
the rabblement hooted, and clapped their chapped hands, and
threw up their sweaty nightcaps …”
[Julius Caesar, Act 1 Scene 2]

The use of the nightcap as a symbol of plebeian life in this scene would have conveyed to Shakespeare’s theatre-going audience the momentousness of this occasion, to have drawn these ordinary men from the peace and quiet of their houses.