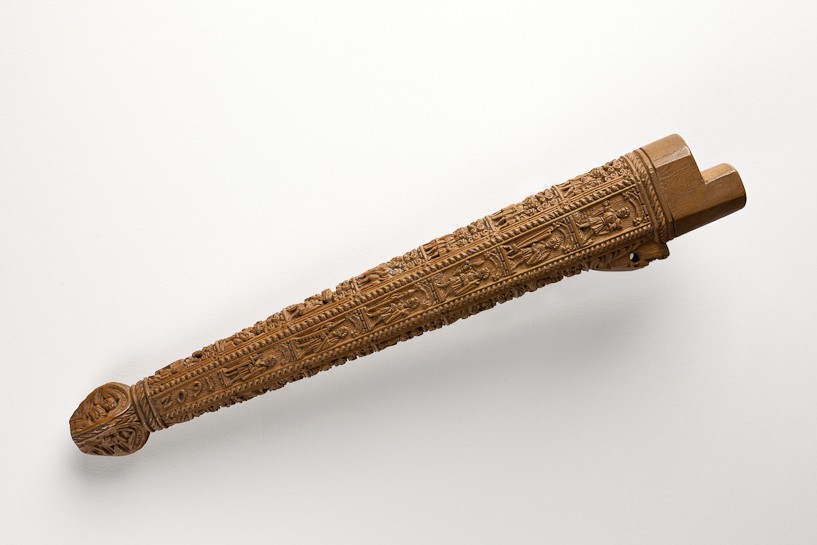 In the sixteenth century it was not unusual for people to carry around their own cutlery and most people carried a knife with them in their day to day lives. This practical object could be carried in a variety of ways depending on your position in society - leather sheaths for the commoner, silken sheaths with gold embroidery for the nobility, or in this case, wood.

This example is dated 1602, and designed to carry a pair of knives. It's made from light brown boxwood and is elaborately carved with Christian motifs. It measure 23 centimetres long, and tapers towards the tip, where it ends in an ornately carved oval knob. The carvings are extremely intricate, with tiny figures set within rectangular frames, one above the other, down the length of the sheath. On one side these depict the six works of mercy mentioned in the New Testament, Matthew, chapter 25, verses 35 and 36:

On the other side are six illustrations of the story of the Prodigal Son. There are also six of the Apostles with their symbols. Above these scenes, at the top of the sheath is a shield supported by an angel, and inscribed with a merchant's mark, with the initials 'I. N'.

This wooden sheath was probably owned by a woman from a prosperous family of the middling-sort in society. The initials ‘W. G. W.’ inscribed near the tip are probably the initials of the maker, who exported items to England from Flanders. It was fashionable in Europe to wear this sort of wooden sheath suspended from a long belt or girdle. An unmarried woman might wear an empty sheath to act as a sign – approved by her parents – of her virginal state and availability for marriage.

Knives were often given as wedding tokens, either for the bride to wear, or to commemorate the betrothal. And, as the nurse from Act 2, Scene 4 of Romeo and Juliet observes, the knife could also carry sexual meanings:

"Oh, there
is a noble man in town, one Paris, that would fain
lay knife aboard; but she, good soul, had as lief
see a toad, a very toad, as see him".