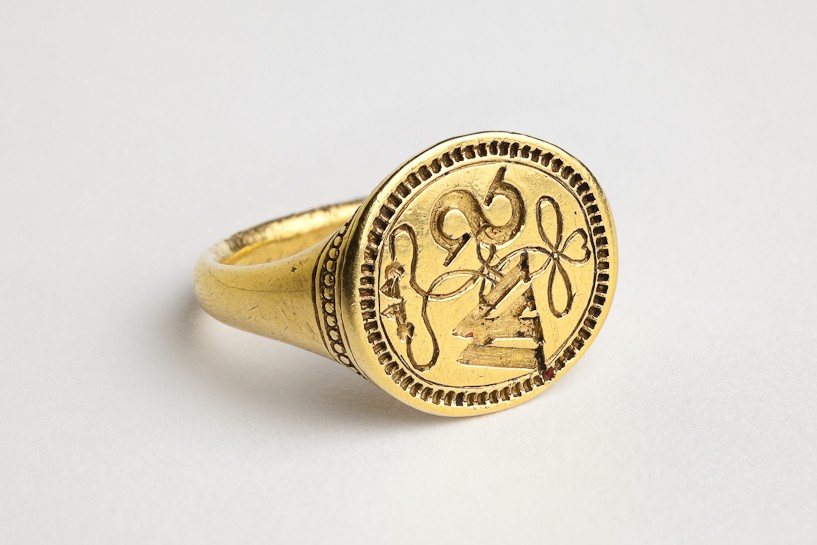 “Look you, sir, here is the hand and seal of the
duke: you know the character, I doubt not; and the
signet is not strange to you”

This gold signet ring dates from the late sixteenth or early seventeenth century. Its oval face has a border of tiny indentations, and prominent in the centre are the initials 'W S' in reverse capital letters.  Interspersed with the initials a knot-work design is incised into the gold. Above the letters are four loops, one in the shape of a heart. This was known as a true lover’s knot. The thread continues down between the initials forming a slightly different looped design called a ‘Bowen’ [BOE-un] knot. Beneath the initials the knot-work terminates in two tassels.

In the sixteenth and early seventeenth centuries, signet rings were used to imprint warm wax applied to documents with the sender’s symbol. This could be a monogram, a coat of arms or any other recognisable design. A seal from a signet ring was often seen as more valid than a hand written signature. By 1600, signet rings were usually worn on the forefinger or thumb - the latter being a fashion revived by Henry VIII.  Rings were also worn around the neck on a chain, and many seventeenth-century signets are not ring-forms at all, but simple seals with handles and a hole for the chain to pass through. They are usually associated with men of business, to be used in professional situations.

Could this be Shakespeare’s lost signet ring? It was found in 1810 near Holy Trinity Church, where his daughter Judith was married on 10 February 1616, just a few weeks before Shakespeare's Will was finalised.

The style of the ring is certainly consistent with its supposed date of origin and there were very few other people living in Stratford-upon-Avon at this time with the initials 'W.S.'  The 1868 Catalogue description reads as follows: 'Shakespeare's gold signet ring, with the initials, W. S., a true lover's knot entwined between them'