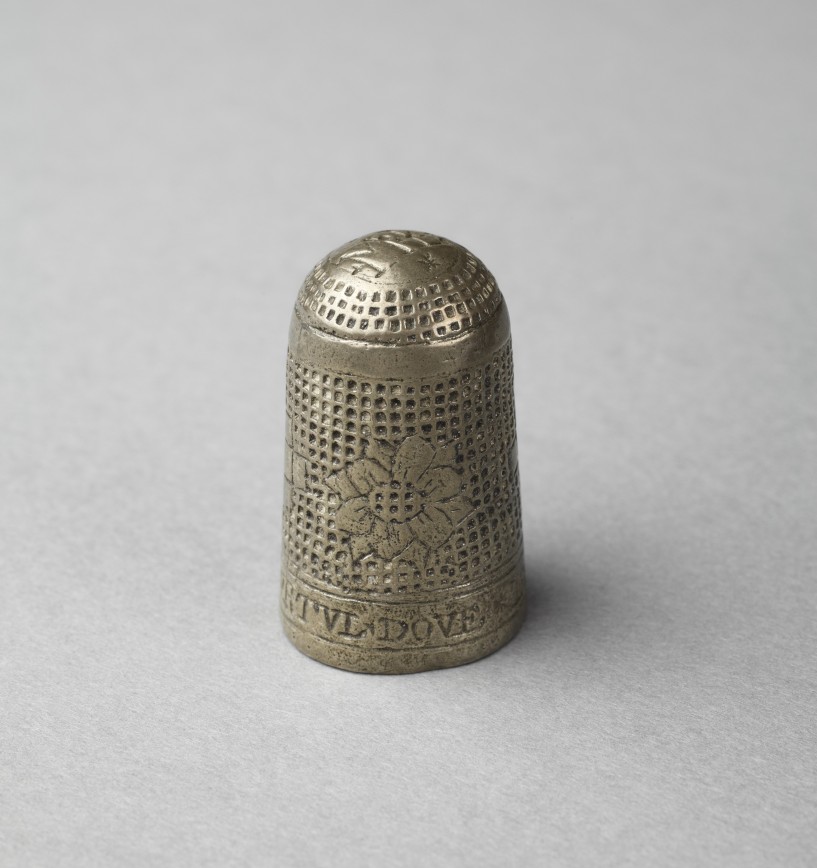 This highly decorated silver thimble is almost 3 centimetres tall. The earliest known metal thimble dates from the Chinese Han Dynasty (206BC - 220AD) and was discovered in the tomb of a dignitary. Thimbles have been found in England dating from the 900s and they were widespread by the 1300s. This one was made in about 1500 - the name thimble coming from the Old English word for ‘thumb’.

A delicate waffle pattern around the thimble's tapering sides provides a background for alternate flower heads and crosses. Engraved in a band around the bottom is the inscription ‘Be true in love as turtle dove, although it is written with some of the vowels missing from words - for example 'true' is T-R-W. The domed top is also waffle-patterned with a central circle engraved with initials.

This intricate silver thimble would have been expensive. The reference to turtle doves suggests it was meant as a romantic gift, as turtle doves are known to keep the same mate for life. They are therefore symbolic of love and commitment. In late Medieval and early modern England, gifts like this would have been exchanged as love tokens, possibly as a sign of the intention to marry. Gift-giving in this scenario had a dual purpose; to show that the man’s intentions were honourable and, if the woman received and accepted the gift, to show that she wanted to pursue the relationship. If she rejected and returned the gift, it would show that she rejected the man’s advances.

Thimbles were associated with female domesticity. The fact that this small object was so closely linked to women’s needlework could suggest that it is an example of a gift that was decorated and given by a woman to her suitor, perhaps in return for a gift he had given to her.

“But come; our dance, I pray:
Your hand, my Perdita: so turtles pair,
That never mean to part.”
[The Winter’s Tale, Act IV, Scene 4]