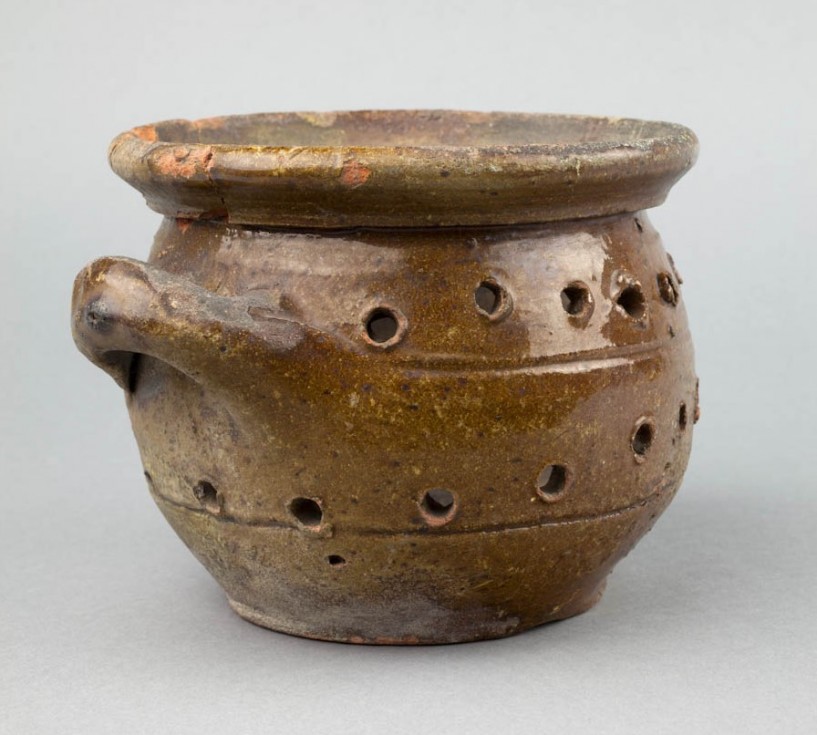 “I wonder, doctor,
Thou ask’et me such a question. Have I not been
Thy pupil long? Hast thou not learne’d me how
To make perfumes? distil? preserve?”
[Cymbeline, Act I, Scene 5, The Queen]

This small round earthenware pot measures about 15 centimetres across at its widest and dates from the16th century. It's decorated in a dark brown mottled glaze on the outside, has a wide lip and is pierced around with two rows of holes. Pots like this would have been used to counteract offensive odours in the home. They would be filled with a sweet-smelling substance, such as a sponge soaked in aromatic oil, flowers or herbs such as meadow sweet. The piercings are uneven, not quite following two horizontal guidelines, and the ridge made when the wet clay was poked through is still visible. It has 2 small applied looped handles, and a section of the lip has broken off and been repaired.

Aromatic containers like this would have stood on a table in the home.  When out and about, though, people of the period might wear a smaller version - called a Pomander. These were generally spherical with pierced sides, and the finest were made of precious metals.  The first reference to a pomander was during the Tudor period, and women were seen wearing them on their girdles or around their necks.  Very strong aromatics, such as musk and civet, formed the basis of many preparations.

Shakespeare mentions the pomander in Act IV, Scene 4 of his play The Winter’s Tale, as Autolycus [or-TOLL-ik-us] says:

“Ha, ha! What a fool Honesty is! And Trust, his
sworn brother, a very simple gentleman! I have
all my trumpery; not a counterfeit stone, not a
ribbon, glass, pomander, brooch, table-book, ballad,
knife, tape, glove, shoe-tie, bracelet, horn-ring,
to keep my pack from fasting: they throng who should buy first, as if my trinkets had been hallowed and brought a benediction to the buyer.”