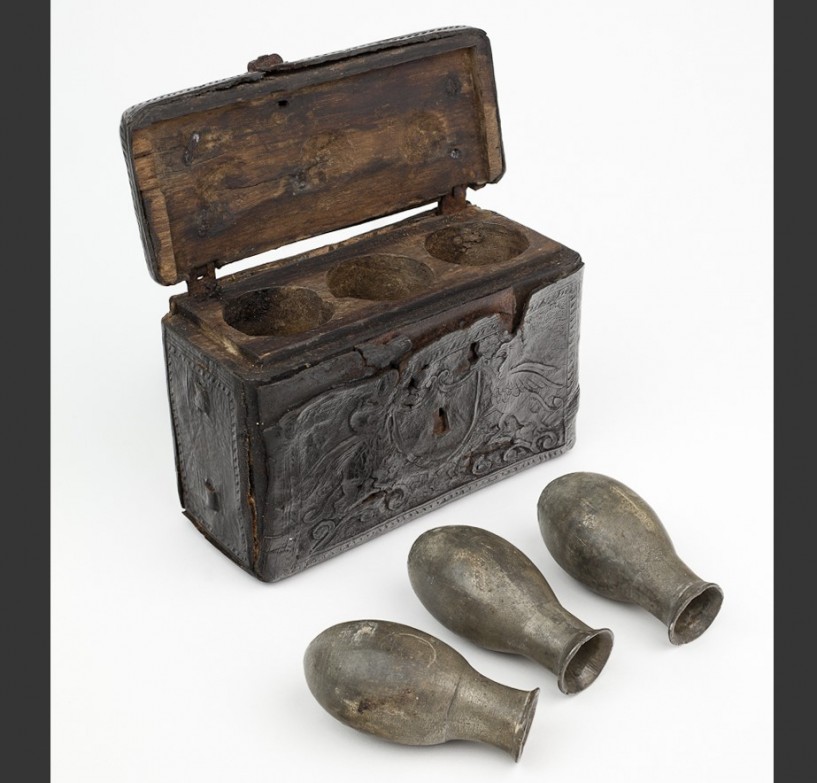 This small leather covered box was made in the 1500s and designed to hold the three oils blessed by a bishop on Holy Thursday. It measures about 14 centimetres wide, 6 centimetres deep, and is almost 10 centimetres high.

The outside of the box is decorated with tooled leather. Dark brown, almost black in places, the leather has worn thin with time and use and the decoration is sometimes indistinct. In places it's crumbled away entirely exposing the wood underneath. The box has a thin lid which is hinged at the back. In the centre of the lid is the image of the Lamb of God. The lamb faces to the left, one foreleg hooking around the bottom of a staff which has a cross at the top. From the cross flows a long triangular pennant. Either side of the lamb are decorative scrolling leaves.

The leather on the front of the box is decorated with two griffins, their wings pointing downwards. The one to the right has a sharp beak and feathers. They stand, one either side, holding between them an empty shield. The metal keyhole of the box protrudes from the centre of the shield.

When the lid is opened it shows that the interior of the box is actually one block of wood, with a row of three cylindrical holes bored into it. Into these holes, three phials [FY-alls] fit snugly. These tear shaped phials are made of pewter and would have had stoppers, though these have been lost.  Each is labelled. One phial has an ‘I’ symbol for ‘oleum infirmorum’ [oh-LAY-um in-FIRM-or-um]- oil for the sick. Another has a ‘C’ symbol. This is "oil of chrism" - consecrated oil for anointing in sacred rites. The third phial has a dotted symbol for ‘oleum sanctum’ [oh-LAY-um SANC-tum] - which is used for baptism.

Each side, small horizontal slits in the leather suggest that a strap passed through them and under the box - so that it could be carried.