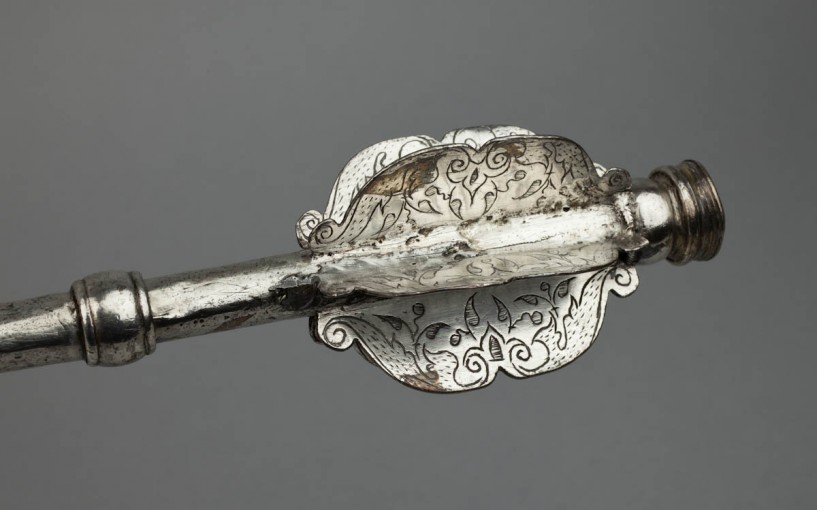 The ceremonial mace has been a symbolic object for hundreds of years and represents power and authority. At one time the mace would have been a practical weapon - a long wooden shaft with a ball at one end, which might be studded with metal spikes. It was used to protect the King’s person if necessary. Ceremonial maces with this practical use were carried from the 13th Century by the Sergeants-at-arms, or ‘royal bodyguards’. Over the years, maces came to look more decorative and less like these weapons from which they took their name - though they retained the same basic shape. From the late 14th Century a wider variety of royal and civic officials began to carry maces and they are still used today.

The Corporation of Stratford-upon-Avon at one point owned 4 maces, and it's possible that one of them was carried by William’s father, John Shakespeare, who became high bailiff (similar to the Town Mayor) in 1568, when William was four years old.

This ceremonial mace was originally made in 1475 of silver with an iron shaft. It's relatively small, measuring only around 42 centimetres long.  The silver was applied in thin sheets, and there are three ring-like collars around the shaft where the sheets are joined, one in the centre, and one at each end.  At one end, called the pommel, six silver wings fan out - like feathers at the end of an arrow. Thin and delicate, their surface is chased with scrolls and leaves. The other end of the mace swells to create a funnel-shaped bowl, topped with a flat, circular disc, around four and a half centimetres in diameter. This is decorated with the Royal Coat of Arms, surmounted with a crown and flanked with ostrich feathers. A highly decorative border of vegetation forms a lacy fringe around the rim of the bowl, though this is somewhat damaged.

This mace shows signs of modification which probably date to the mid-16th Century when the Corporation had a second mace made after they proclaimed that two sergeants-at-mace were required for proper government.