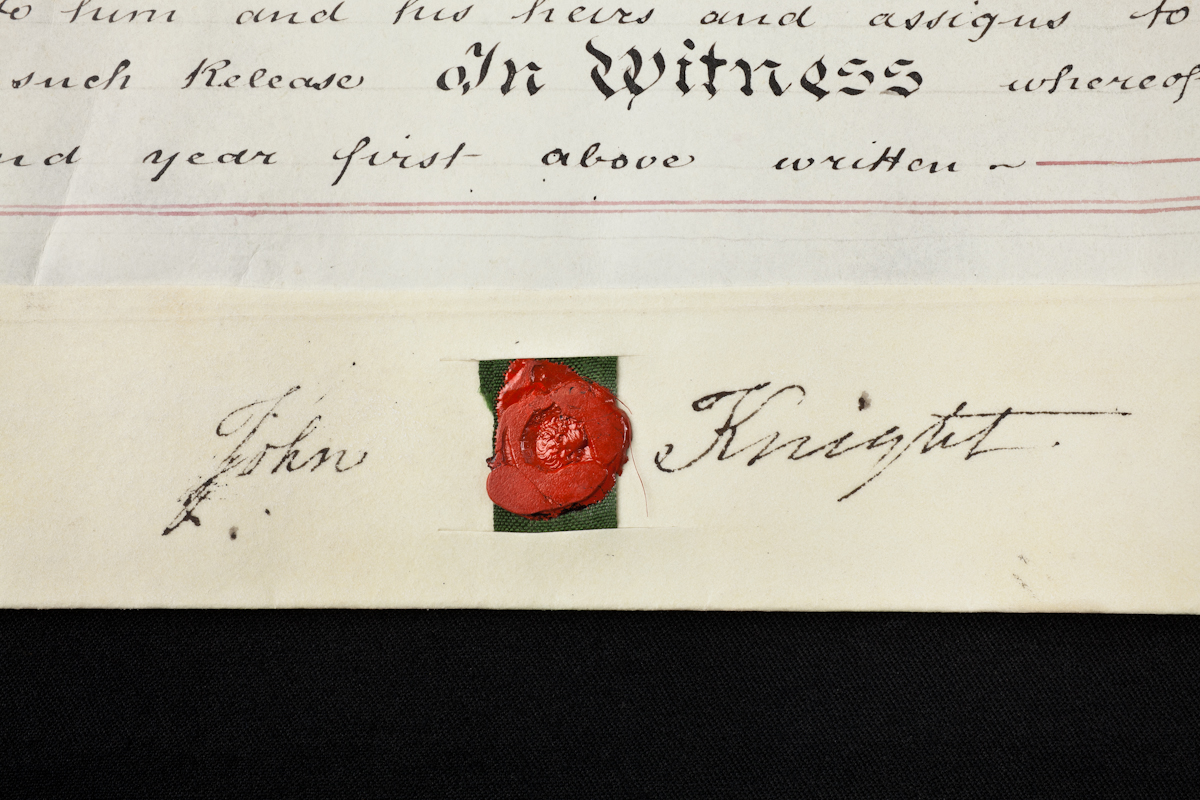 Conveyance by lease and release from John Knight of Simonsbath co. Somerset esq. to William Henry Bowen Jordan Wilson of Gumley Hall co. Leics. esq. reciting the will of Benjamin Palmer of Olton in Solihull esq. dated 5 July 1767, whereby inter alia he devised to his wife's brother Edward Knight jun. esq. all his estate in Wootton Wawen on certain trusts, and that testator died on 13 June 1772, and reciting indentures of lease and release dated 24-25 February 1779 (see no. DR 225/21 ) whereby Edward Knight jun., William Richard Wilson esq. and Jane Anne Eleanor his wife, Henry Greswolde Lewis esq. and the Rev. Henry Wigley clerk, in consideration of £2,000 paid by Thomas Fisher esq. to Charles Baldwyn esq. and Elizabeth his wife formerly Elizabeth Palmer widow and relict of the said Benjamin, conveyed to the said Thomas Fisher the manor of Ulnall alias Ullenhall with a capital messuage called the Hall and lands (not specified) in Wootton Wawen except the Hop Yard close, the Little Hopyard, Lower Lady meadow, Little Fawstens, Great Fawstens, two Benton closes and part of Green Lane close as then staked out, and reciting the death of Edward Knight jun. in May 1812 leaving the said John Knight his nephew and heir at law, and an Act of Parliament of 2 William IV for making partition of estates in Warwickshire between W.H.B.J. Wilson and Edmund Meysey Wigley Greswolde esq., of his outstanding legal estate in such of the lands and premises devised by Benjamin Palmer in Wootton Wawen as were excepted from the conveyance of 25 February 1779, viz. the Hop Yard close and others specified above, all which said lands c. were comprised in the first schedule of the said Act of Parliament by the name of Forsters farm in the occupation of Humphry Parkes and containing 44 acres 2r. 24p. Signed and sealed: John Knight. Seal applied on green silk: a man's head. Witness: Tho. Chattock. With a file of certified extracts from the parish registers of Wolverley, co. Worcs. and (one) of Stokesay co. Salop enclosed, made 2 3 May 1837. Endorsed: Called Fosters. Purchased to the uses of the will of Earl Catherlough decd. of W.H.B.J. Wilson esq. Indres dated 25 26 June 1837. [Purchase No. 29]