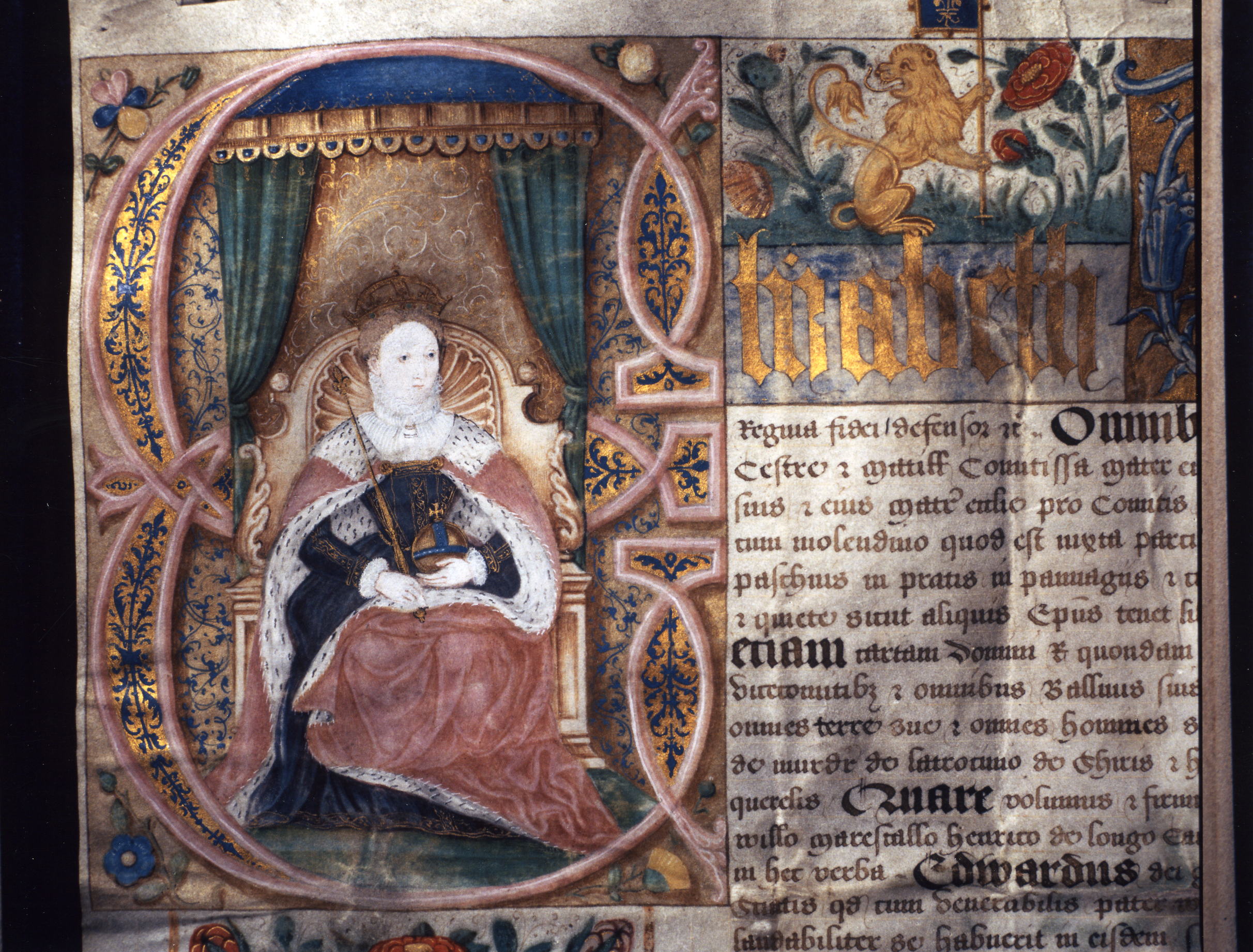 Charter of `inspeximus' of Elizabeth I, reciting the following: a) gift from Hugh, earl of Chester, to Walter, bishop of Chester [no. 575] b) Release from Richard I to Hugh, bishop of Coventry, for all the latter's manors, lands and men of the churches of Coventry and Lichfield and of Chester, Shrewsbury and Gnoushale (Staffs), and for all his churches, from suit at the shire and hundred courts, and from sheriffs' aids and forest pleas. Witnesses: Hugh, bishop of Durham, Hubert, bishop of Salisbury, Robert, earl of Leicester, William Mariscal, and Henry de Longo Campo. Dated at Canterbury, by the hand of the chancellor, William, bishop elect of Ely, 30 November 1 Richard [1189] c) gift from Edward I to Walter de Langton, bishop of Coventry, the king's treasurer, of the return of all writs, the chattels of all fugitives and all fines and amercments within his lands. Witnesses: Anthony, bishop of Durham, Richard, bishop of London, John,bishop of Winchester, John de Warren, earl of Surrey, Henry de Lacy, earl of Lincoln, Thomas earl of Lancaster and others [named]. Dated at Westminster, 18 April, 27 Edward I [1299] d) letters patent of Richard II, exemplifying the following: i) plea of `quo warranto', dated 13 Edward I [1284-5] concerning the claim of the abbey of Stoneleigh to the manor of Stoneleigh and of legal rights and privileges in Stoneleigh hamlets. ii) plea of novel disseisin, dated 1378, between the abbey of Stoneleigh, plaintiff, and John Burnel of Cryfield and Alice his wife and Richard Imayn, deforciants, concerning property in Stoneleigh. Note that these exemplifications were made at the request of Thomas de Shulton, abbot of Stoneleigh. Dated at Westminster, 8 May 15 Richard II [1392] [Richard II's charter is printed in the Stoneleigh Leger Book, p. 47-50] Elizabeth's exemplification ends with the note that her charter had been granted at the instance of Arthur Gregory, esq., now holding the vills of Stivichall, Hellinhull, Finham, and Canley, lately belonging to the said bishop and abbot. Dated as Westminster, 11 November, 14 Elizabeth. Great seal attached by cords, with cast of reverse